NORTH HARBOUR LADDER COMPETITION 2021 – Mixed Doubles will conclude with only four rounds being played due to the COVID-19 lockdown.  Doubles Ladder has concluded after 5 rounds.

Draws and schedule are now available for the first round of each event.

Just a reminder that for doubles, the event is played over two weeks to accommodate the number of players.  Boxes 1-10 play one week and boxes 11-19 play the following week.  Please check the boxes to see where you are placed which will relate to which date you play one.

The singles ladder has now concluded.  Congratulations to Tony Fang for winning this event.

The doubles ladder has now concluded.  Congratulations to the players that placed in this event.  As we had teams tied on scores we have awarded 1= and 3= for this event.  Great to see how close players are after five rounds of play.

Mixed Doubles ladder has now concluded with the final two rounds unable to be played due to the COVID-19 lockdown.  Prizes will be awarded at the Annual Awards evening in February. 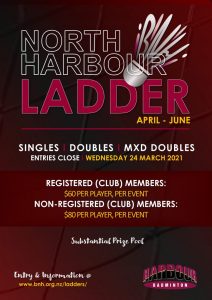