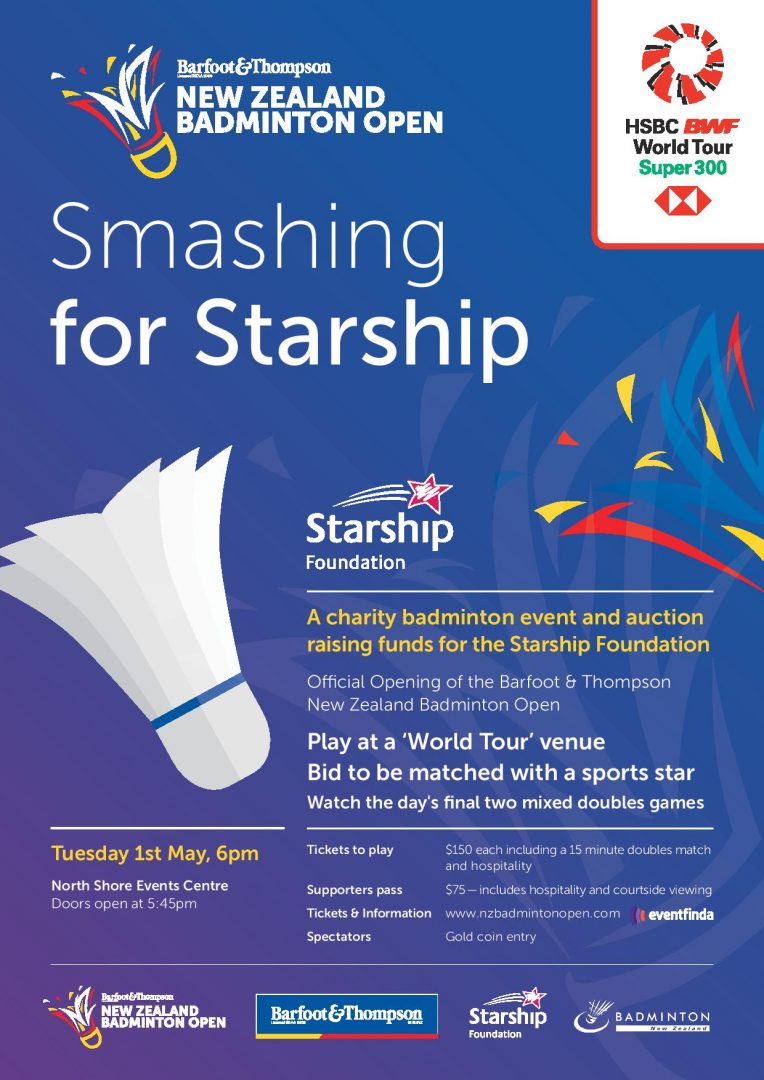 North Harbour badminton community, get behind this great cause and support Starship Hospital while having the opportunity to play badminton with and/or against a sports star. If you are not a player and still want to be a spectator, a gold coin donation will get you in the door. There will also be an auction with many items including signed playing shirts, badminton product and so much more. Dig deep and get involved for such a great cause.

A MESSAGE FROM THE ORGANISERS…

As part of the BARFOOT & THOMPSON New Zealand Open we are holding a charity night to raise funds for the Starship Foundation – SMASHING FOR STARSHIP, this is also the official opening of the tournament; there will be some of the stars of the tournament on-hand to sign autographs, shirts etc

The night will include people playing doubles matches (partners drawn) on the match courts, there will be some guest/sports star players who you will be able to bid for as a playing partner

Matches will be 15 minutes long

Players will need to wear appropriate playing clothing, non-marking shoes and supply their own badminton racket

There are changing rooms and showers at the venue

All players and supporters will be provided with a great night of entertainment, finger food and beverages concluding the evening with two main draw feature mixed doubles matches

There will also be an auction during the evening with some awesome packages up for grabs including Yonex framed shirts signed by some of the biggest names in world badminton, and some of the new Yonex product to be released

To purchase tickets either as a player or supporter of SMASHING FOR STARSHIP go to: https://www.eventfinda.co.nz/2018/smashing-for-starship/auckland/wairau-valley 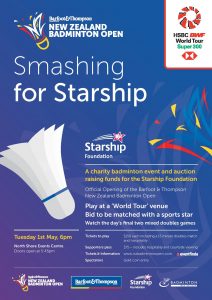 The programme for the night is:

This event will double as the official opening of the BARFOOT & THOMPSON New Zealand Badminton Open.