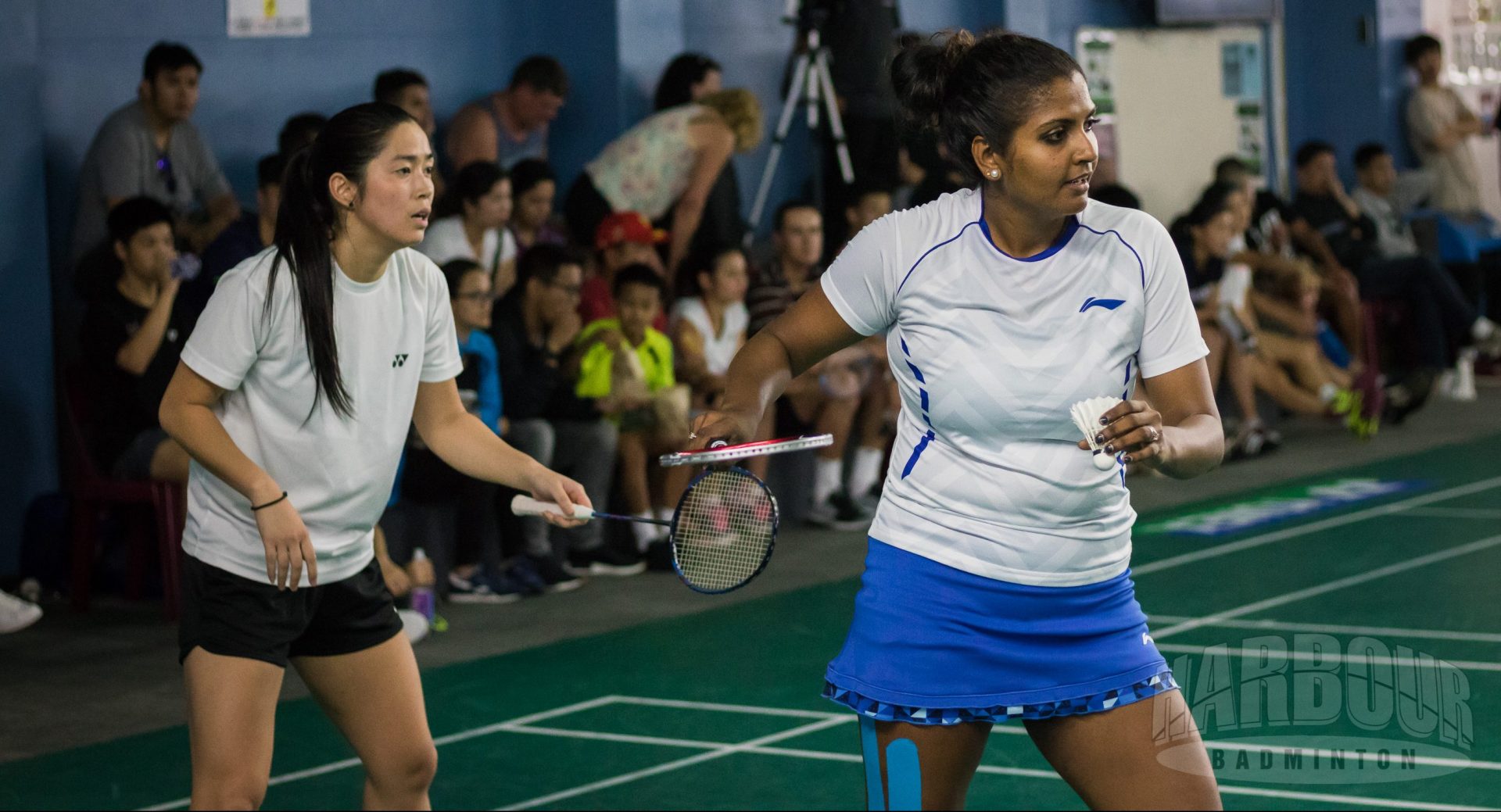 The Australians in the event bounced back after losing several top players in the earlier rounds, with six of their nine quarter-finalists booking a place in today’s Semi-finals. In contrast, the New Zealand players have found their way into 12 semi-final berths, and with a number of all-Kiwi matches, they are guaranteed several finals spots.

In the Men’s singles, Oscar Guo continued his strong form, dismissing Remi Rossi (Tahiti) 21-11 21-17. Abhinav Manota, the current New Zealand National Champion, made short work of the second seed, Australian Pit Seng Low, with the 21-9 21-12 match over in just 27 minutes. He goes on to face Ashwant Gobinathan (Australia) who progressed after a hard-fought win over Daxxon Vong 22-20 14-21 21-12, managing to find a second wind as Vong tired in the third game. The final match between New Zealanders Edward Lau and Dylan Soedjasa promised to be an exciting battle but unfortunately didn’t live up expectations, with an injury to Soedjasa hampering his ability to offer much resistance. Lau progressed to the semi-finals with a 21-11 21-10 victory.

The highlight of the Women’s singles was undoubtedly the match between Louisa Ma (Australia) and Sally Fu (New Zealand). With Fu freshly back from 6 weeks of training in Denmark, expectations were high and the badminton on display was worthy of a final. With a delicate balance of aggression and careful control, the first two games went point-for-point, before Ma was able to open a small lead and defend it to win the third game, and the match 21-16 18-21 21-13. New Zealand’s hopes now fall onto Shaunna Li, a 14 year old from North Harbour, who has progressed into the semi-finals by defeating Yongshi Xie 21-18 21-17. Jesica Muljati (Indonesia) and Jennifer Tam (Australia) round out the semi-finals, having defeated Jaqueline Lima (Brazil) and Gaea Galvez (New Zealand) respectively.

Tight and high-speed battles were the defining characteristic of the Men’s doubles quarter-finals, with rapid exchanges at the net and relentless smashes the norm. Top seeds Simon Wing Hang Leung and Mitchell Wheller had a fright in the first game against Samuel Ho and Riga Oud, scraping through to win 23-21. The draining encounter however sapped the energy out of Ho and Oud, with Leung and Wheller taking the match easily with a 21-5 win in the second game. The last match of the evening, between Jonathan Curtin/Dhanny Oud and Cham Chen/Toby Wong, ensured that none of the capacity crowd left early. The tense battle started well for the lower-ranked Chen and Wong, winning the first game 21-16. Curtin and Oud however began to find their rhythm, winning a close second game and holding on to take the third, to win 16-21 21-19 21-17. Kevin Dennerly-Minturn and Oliver Leydon-Davis showed their class to send compatriots Alfred Wong and Jian Wang packing – their 21-15 21-12 match over in 29 minutes. In the fourth quarter-final, brother Daxxon and Dacmen Vong were the benefactors of a walkover, following Dylan Soedjasa’s earlier injury in the men’s singles.

The Women’s doubles followed the script, with all the remaining seeds earning their semi-finals spot. The dark horse in the mix is Kiwi pair Sally Fu and Susannah Leydon-Davis – both talented players, and who have the potential to cause an upset. They face Erena Calder-Hawkins and Jasmin Ng, who progress after a challenging 16-21 21-13 21-13 match against Shaunna Li and Charmaine Wu of New Zealand. The second semi-final features Australians Renuga Veeran and Leanne Choo playing Anona Pak and Danielle Tahuri. Veeran and Choo make their way to the semi-final having defeated Kayrn Gibson and Andra Whiteside 21-6 21-10; Pak and Tahuri by getting past Kylie Luo and Yongshi Xie 21-12 21-16.

An upset in the mixed doubles sees Kevin Dennerly-Minturn and Kylie Luo through, defeating top seeds Dhanny Oud and Jasmin Ng 21-17 21-16. They will face Fabricio Farias and Jaqueline Lima of Brazil, who enter the semi-final on the back of a tough win over Jonathan Curtin and Danielle Tahuri. Huaidong Tang and Jennifer Tam meanwhile will face Maika Phillips and Anona Pak. Tang and Tam eventually found their way past Edward Lau and Erena Calder-Hawkins, with the tough 21-18 20-22 21-13 match taking 42 minutes. In contrast, Phillips and Pak took just 19 minutes to dismiss the challenge of Peter Yan and Maggie Chan 21-7 21-11 and make their way into the semi-finals.

Play begins at 10am, followed by finals beginning at 4pm. The action is free to watch at Badminton North Harbour, or streaming online at bit.ly/BOCbadmintonlive